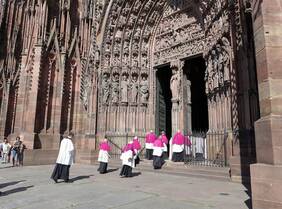 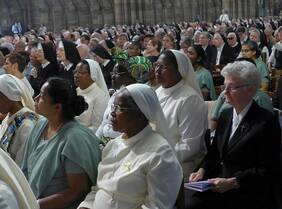 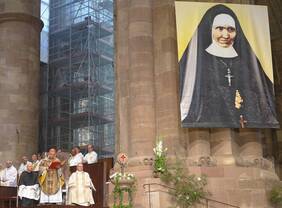 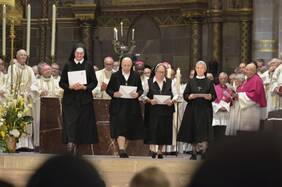 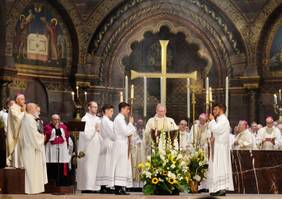 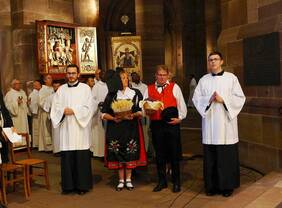 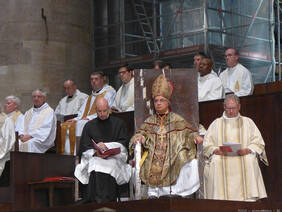 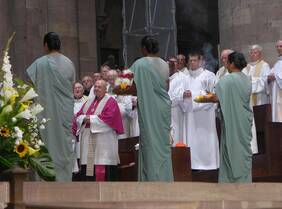 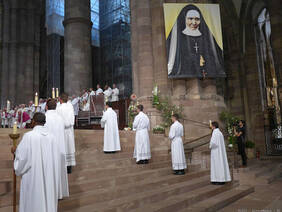 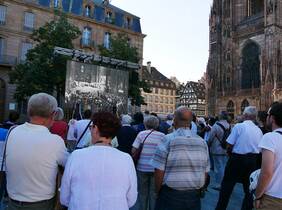 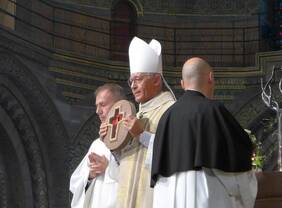 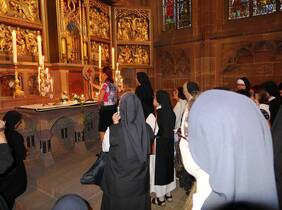 There are rare beatifications in a diocese. But this 9th September 2018 saw that of an Alsatian, Foundress of the Congregation of the Sisters of the Divine Saviour, Mother Alphonse Marie.

We must see the excitement around Strasbourg Cathedral in the hours and minutes before the celebration of the beatification presided over by Cardinal Angelo Becciu, Prefect of the Congregation for the Cause of the Saints. Monsignor Luc Ravel, Archbishop of Strasbourg, could boast of having, for a few hours, transformed the capital of Europe into the capital of the world! In fact, the buses arrived from Germany, Austria and Slovakia, but there were also noticeable sisters from Hungary, Angola, Cameroon, Tanzania, India, Argentina, and USA.

A common point for all these faithful about 2000 lay associates, religious, ordained ministers, collaborators of the sisters, friends: joy and fervor! A joy that break out in a beautiful noise on the courtyard of the cathedral, where each one made their comment in their language: "amazing", "touching", "wonderful" ... The celebration was at the peak of the event, solemn, deep, challenging and joyful. It started with the rite of beatification. After recalling the biography of Mother Alphonse Marie and the development of the congregation she founded, the Cardinal read the Pope's declaration and the rite ends with the unveiling of a grand portrait of the Blessed in the cathedral which was at once tosses applause expressing emotion, joy, gratitude ... for the blessed named by some "the saint of the peripheries".

Later, in his homily, the Cardinal explained the human and spiritual personality of the new Blessed and he did not fail to invite Strasbourg, capital of Europe, to follow her example by refusing the withdrawal and the selfishness to open oneself to the merciful love of God.

The Alsatians have something to be proud of the beatification of one of them, Mother Alphonse Marie, born Elisabeth Eppinger, a simple woman of modest origin. At the end of the ceremony, all were invited for the veneration of her relics.

The next day, on 10th September a thanksgiving Mass was celebrated by Monsignor Christian Kratz in Niederbronn les Bains (birthplace of the Blessed).

From now on, the Church gives us a new model, who intercede for us and urges us to commit ourselves to the path of holiness. Then, as St. Paul says, let us run to strive for that goal and ask Blessed Mother Alphonse Marie to pray for us by God.